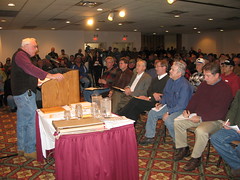 Based on the loud applause that followed, former state representative Allen Lowe, (R) Grayling, summed up the sentiment in the overflowing crowd present at the Ramada Inn.

“All the people want is a government that’s going to protect their rights and provide the services they need. But what we often find is that government takes away our rights – and our money,” Lowe said.

Former and current state legislators were seated directly in front of the podium, but none but Lowe spoke there. Most took notes and spent about a hour afterward discussing concerns with the gathered crowd, which included representatives of just about every outdoor activity. The rally brought equestrians and off road riders together; trappers and hunters; anglers and foresters. One thing they all seemed to have in common – frustration with the Department of Natural Resources.

Rep. Joel Sheltrown, (D) Howell, who chairs the state House Committee on Tourism, Outdoor Recreation and Natural Resources, said he drove the five hours north to Marquette because many of those speaking have driven the opposite direction to express concerns to his committee.

“A lot of the concerns voiced at this meeting I’ve heard in my area also,” Sheltrown said. “There definitely needs to be some changes. The (DNR) funding problem is only the tip of the iceberg. We need to get back to the basics of the DNR. We need to start managing the resources. Sportsmen put in $3 billion dollars into this economy. We need to promote that.”

Dine in at The Landmark Inn