A team of technical experts is poised and ready for action whenever a call or email reports a potential sighting of one of Michigan’s Watch List invasive species. These experts are a part of Michigan’s Invasive Species Program, a collaborative effort of the departments of Environmental Quality, Natural Resources, and Agriculture and Rural Development.

“Preventing invasive species from entering the state is the first goal of the invasive species program, but when invaders slip through the cracks the next step is early detection and response,” said Sarah LeSage, aquatic invasive species coordinator for the Department of Environmental Quality.

This process involves finding, reporting, confirming and then choosing a course of action to manage new or emerging invasive species that pose a significant threat to Michigan’s environment, economy or human health.

High-threat invasive species are classified on Michigan’s Watch List. There currently are 28 species on the watch list:

Of the 10 aquatic plants on the watch list, six have been detected in limited areas in Michigan. Plants including yellow floating heart, water lettuce, European frogbit and parrot feather have been found by staff during monitoring activities, as well as by members of the public, Cooperative Invasive Species Management Area staff and lake management companies.

Sightings of aquatic plants on the watch list are reported to the DEQ’s Aquatic Nuisance Control office or through the Midwest Invasive Species Information Network’s website or smartphone app, found at www.misin.msu.edu. 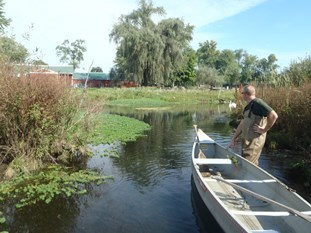 Once a watch list species is reported, staff begin the early detection and response process. The report is investigated, and photos or specimens are examined by experts. If identification is positive, a site visit is made to determine the extent of the invasion. For aquatic plants, a boat survey of the waterbody and connecting waters usually is undertaken.

The state’s aquatic invasive plant early detection and response team has been active since 2011 with support from the Great Lakes Restoration Initiative. “The team conducts investigations and responds to positively identified detections by assessing the risk posed by the invading plant, reviewing response options and, if feasible, planning and implementing a response,” said LeSage.

A story map, Aquatic Invasive Species: Early Detection in Michigan, displays locations where surveys for aquatic watch list species have occurred and describes response actions that were taken when positive identifications were confirmed.

Responses are tailored to the situation. A large infestation, such as the widespread areas of European frogbit along the Lake Huron shoreline, may require multiple partners like Cooperative Invasive Species Management Areas, volunteers and contracted pesticide applicators working together over time to manage it. A smaller discovery, like the 2016 detection of European frogbit in Reeds Lake in East Grand Rapids, may provide the opportunity to eradicate the plant from the area using chemical application.

“Early detection and response is truly a statewide effort,” said LeSage. “It relies on detection and reporting from citizens across Michigan, as well as monitoring and management support from the local management areas, landowners, local governments and the private sector.”

Gov. Rick Snyder has proclaimed July 2-8, 2017, as Aquatic Invasive Species Awareness Week. Everyone can help in early detection of invasive species by becoming familiar with Michigan’s Watch List and other invasive plants, insects and animals and reporting any sightings.

Descriptions of watch list species can be found at www.michigan.gov/invasivespecies. Short identification tutorials for many invasive species are available at www.misin.msu.edu.

To report aquatic invasive plants, call or email DEQ Aquatic Nuisance Control at 517-284-5593 or DEQ-WRD-ANC@michigan.gov. Online reporting is available at www.misin.msu.edu, or download the MISIN app to your smartphone.

A Special Meeting of the Board of Education, Gwinn Area Community Schools Monday, September 30, 2013